Between grain and oil from the Azov to the Caucasus: the port-cities of the eastern coast of the Black Sea, late 18th – early 20th century 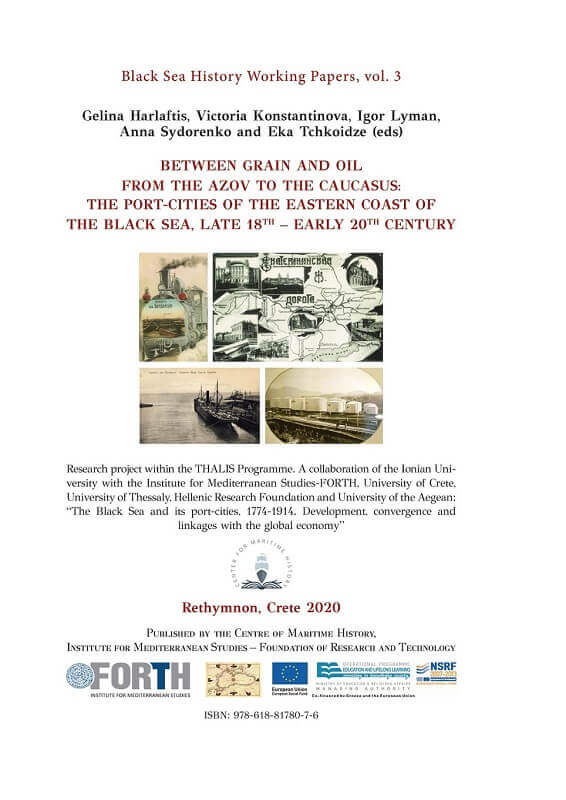 1. As an introduction: Black Sea History and the Black Sea project, Gelina Harlaftis

Part 1 – Because of the Sea

2. Black Sea Maritime and Economic History. The integration of the port-cities to the global economy, Gelina Harlaftis
3. The Volga-Don Road to the Black Sea: evolution and reality of the 19th century, Nailya Tagirova
4. From the Azov to Batoum: evolution of the port-cities in the Russian frontier land. Politics and administration, Victoria Konstantinova and Igor Lyman

5. Controlling the straits: The development of the port of Kerch, Anna Sydorenko
6. Fisheries of the eastern coast of the Azov Sea in the late 18th – 19th century – Organization, infrastructure and everyday life, Alexei Kraikovski
7. The history of the Azov Sea and the northern Azov Sea area during the holocene, Gennady Matishov

Part 3 – Around and about the Sea

8. Taganrog: Greek entrepreneurship in the Russian frontier of international trade, Evrydiki Sifneos and Gelina Harlaftis
9. Ethnic processes in Mariupol and Russia’s imperial migration policy. (19th – early 20th century, Irina Ponomariova
10. Ethnic factor in the economic development of Mariupol (late 18th – early 20th century), Svitlana Novikova and Vira Volonyts
11. The great plans for developing Berdyansk – Igor Lyman and Victoria Konstantinova
12. The rural population of Don’s hinterland as a factor of the economic life of Rostov, end of the 19th century, Marianna Abdullayeva
13. Rostov-on-Don in the second half of the 19th – early 20th century: Dynamics and specificities of the socio-economic development, Natalya Samarina
14. Nahichevan-on-Don: Armenian merchants and their role in the commercial development of the Azov – Black Sea region, Sarkis Kazarov
15. Novorossiysk: the formation and development of the city, Olga Popova
16. Oil and soil: the role of Batoum’s economic development in shaping of geopolitical significance of the Caucasus, Eka Tchkoidze