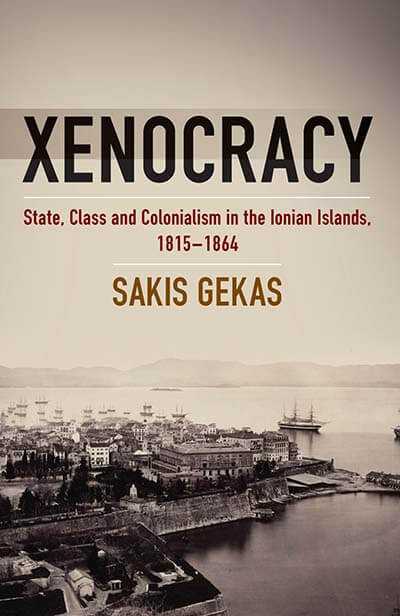 This study offers a much-needed account of the region during its half-century as a Protectorate of Great Britain—a period that embodied all of the contradictions of British colonialism. A middle class of merchants, lawyers and state officials embraced and promoted a liberal modernization project. Yet despite the improvements experienced by many Ionians, the deterioration of state finances led to divisions along class lines and presented a significant threat to social stability. As Sakis Gekas shows, the ordeal engendered dependency upon and ambivalence toward Western Europe, anticipating the “neocolonial” condition with which the Greek nation struggles even today.

List of Figures
Introduction
Chapter 1. The First Greek State and the Origins of Colonial Governmentality
Chapter 2. Building the Colonial State
Chapter 3. Law, Colonialism and State Formation
Chapter 4. Colonial Knowledge and the Making of Ionian Governmentality
Chapter 5. ‘A True and Hateful Monopoly’: Merchants and the State
Chapter 6. State Finances and the Cost of Protection
Chapter 7. Building a Modern State: Public Works and Public Spaces
Chapter 8. ‘Progress’: State Policies for Ionian Development
Chapter 9. Poverty, the State and the Middle Class
Chapter 10. The Literati and the Liberali. The making of the Ionian bourgeoisie
Conclusion: 1864; the end of colonial rule?
Bibliography
Index