Trust and Power: Consumers the Modern Corporation, and the Μaking of the United States Automobile Market 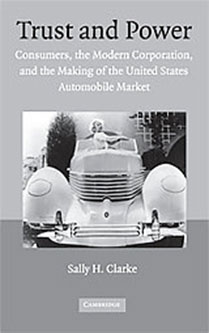 Buying a car, the old adage tells us, is "the most important purchase you will ever make, after your home." Sally Clarke has written an extremely important and insightful book that explores the never-ending tug-of-war between companies, consumers, and the state to define the parameters of America's most important market. At the core of this broad, longitudinal study, is the simple yet elegant notion that the marketplace, and the relationship between consumers and firms, shapes not only the organization and structure of a firm, but how notions of trust and power play out in the real world of auto making and selling. Utilizing a vast and impressive array of approaches and sources, Clarke takes a political economist's unsentimental approach to unravel how the car market, built as much on emotion as on rationality, emerged and evolved.
Initially, at the automobile market's creation, innovation was difficult and costly as automakers sold imperfect vehicles to willing auto enthusiasts. Recognizing the threat of liability from defective autos, manufacturers sold their cars to dealer networks in order to deflect lawsuits. This forced consumers and dealers to shoulder the cost of innovation. The practice ended with the important 1916 Macpherson v. Buick case. Judge Benjamin