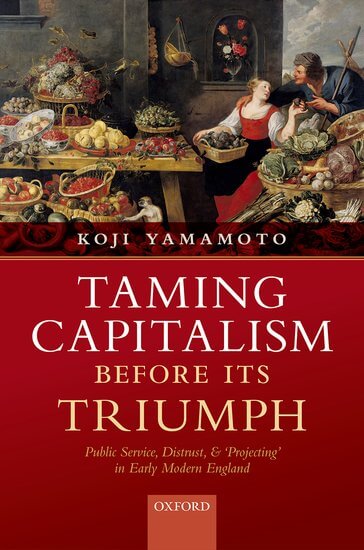 The study examines the darker side of England's culture of economic improvement between 1640 and 1720. It is often suggested that England in this period grew strikingly confident of its prospect for unlimited growth. Indeed, merchants, inventors, and others promised to achieve immense profit and abundance. Such flowery promises were then, as now, prone to perversion, however. This volume is concerned with the taming of incipient capitalism — how a society in the past responded when promises of wealth creation went badly wrong. It reveals a history of numerous visible hands taming incipient capitalism, a story that Adam Smith and his admirers have long set aside.

The notion of 'projecting' played a key role in this process. Thriving theatre, literature, and popular culture in the age of Ben Jonson began elaborating on predominantly negative images of entrepreneurs or 'projectors' as people who pursued Crown's and their own profits at the public's expense. This study examines how the ensuing public distrust came to shape the negotiation in the subsequent decades over the nature of embryonic capitalism. The result is a set of fascinating discoveries. By scrutinising greedy 'projectors', the incipient public sphere helped reorient the practices and priorities of entrepreneurs and statesmen away from the most damaging of rent-seeking behaviours. Far from being a recent response to mainstream capitalism, ideas about socially responsible business have long shaped the pursuit of wealth, power, and profit. Taming Capitalism before its Triumph unravels the rich history of broken promises of public service and ensuing public suspicion — a story that throws fresh light on England's 'transition to capitalism', especially the emergence of consumer society and the financial revolution towards the end of the seventeenth century.